I remember when this story broke on twitter I was making my way to the unofficial official fan park, Mojitos on Long street, to join my friends for the final game of the 2010 World Cup


After the closing ceremony and before the final match, this brilliant young man jumped onto the field, sprinted across in his mad dash to either touch or steal the gold trophy! He got so close. 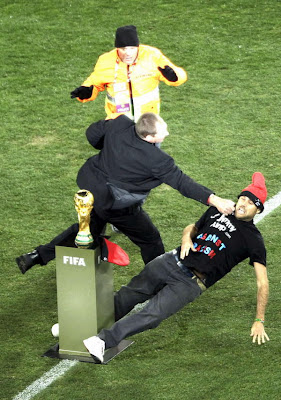 The comments on twitter were so hilarious, mainly from people who were at Soccer City that night – from reports of him getting a beat down to people trying to figure out why he did what he did. Either way, he’s my hero!