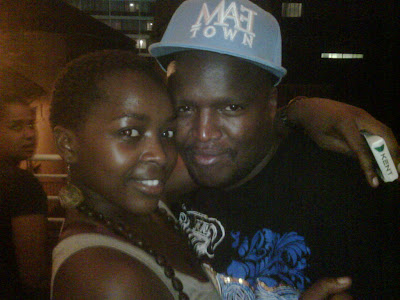 There’s a lot about this picture that has sooo many memories for me. I giggle every time I look at it.

I’ll try break it down as best as I can.

Earrings:
These were my favourite earrings in the whole world. Note that past tense of ‘were’ – you see, I lost them that night. How, I really don’t know and I think it best that I don’t dwell too much on the fact that they are gone forever! I had bought them about 3 years ago from a guy on the ‘promenade’ in camps bay, Cape Town. Back when they allowed street vendors to sell their wares on the street. They looked like little bamboo birds nests, and sometimes looked like light balls on elastic bands all rolled up together hanging off my ear. The birds nests were my most effortless complicated statements. The search for a new pair statements begins!

HHP aka Jabba:
Motswako artists, one of South Africa’s best hip hop artists, the Jabba man who makes Xhosa girls like me recite Tshwana raps as if it was our mother tongue. Oh the many times I have mimicked word for word in a language I don’t quite have my tongue wrapped around. We met in Salvador, Brazil, connected on the tour bus back from a historical tour of Bahia, became friends and every time we see each other have so much to catch up on in short bursts of time. Our meeting reminds me of that Roots track with Erykah Badu- You Got Me ‘somebody told me that this planet was small….and never met before til I’m overseas on tour’ ( yes, I have paraphrased). We are both always commenting on how we had to be in a different country to really meet and talk and find that we could be friends. I imagine that is difficult when you have more fans than friends.

He performed that night, it was fantastic, even though the sound got a bit messed up…

Don’t mind the cigarettes, I’m a smoker, I like it. I’m so thankful for the three or four balcony areas at The Waiting Room (that’s where the picture was taken).

I had so much fun that night, it was just blissful. It was ecstasy. It was silly. It was loud. It was quiet. It was simple and complicated. It was memorable for how easily it happened. That, pure bliss without exaggerated drama or false agendas is why I love Cape Town