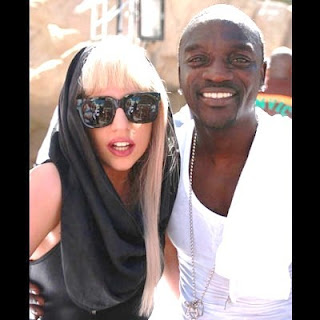 So Mr. ‘I’m too cool for school’ and I don’t answer questions at press conferences Akon is in town

He’s either on his way to Angola or back from there, but he’s here anyway. The highlight if his visit to South Africa is the sassy Lady Gaga accompanying him (or so they say.) Word on the street is that he’s also supposed to be launching a clothing line. Whatever.

So the convict who likened his ‘grand theft auto’ incarceration to that of struggle icon’s, Nelson Mandela, incarceration on Robben Island attended a party in his honour last night. Yeah right buddy. Unless you were stealing that car to get Obama out of trouble, I don’t think so.

Anywhoo, The Akon party sans performance required fans to pay R150 to get into the lavish club Inc in Braamfontien to stare at the artist. I’m sure champagne was popped and the star-blinded sheep were dancing and singing along to Akon auto-tuned tracks and hoping to get a whiff of the superstar and hope to be remembered.  He is after all the ‘Prince of Africa’

Wait one minute folks… did ya’ll find out only yesterday that this would be happening? A source tells me that the shoot only started at 4pm, with fans having waiting all that time for their own shot at fame.

It is said that he’ll be singing the official 2010 Soccer World Cup anthem – cue auto tune. Save our ears!

No that you’ve read the whole Akon bashing saga; the only highlight of this post is that every time I type his name, I mistakenly add an additional ‘a’ which then spells my name. Akon+a= Akona. (even spellcheck wants me to spell my name)