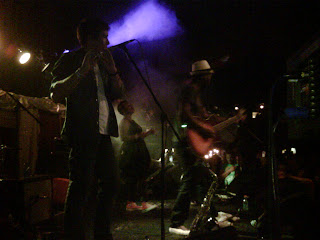 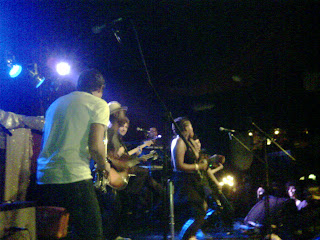 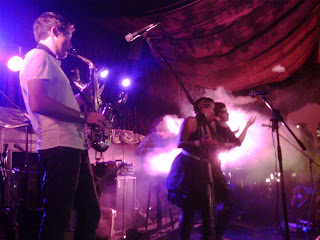 
Okay, maybe I hadn’t wanted to believe it before, but I do love me some Freshlyground; from the days of Nomvula. That song, particularly, touched something deep inside of me – it is about the loss of her mother when she was a child, the emotions of it all, how her father tried to be strong. My mother passed away when I was 14, and to this day, I’m still dealing (kinda) with the pain.

I don’t really know much about the band – and I’d like to keep it that way – they make beautiful music and I’m happy with that. I have a problem with probing into an artist’s story, background etc; their craft is their story in my mind and heart.

Back to the show:

Friends and I got some free tickets to attend Freshlyground show at Vaudeville on Sunday 27 June. I was excited for most of the week leading up to the event and it truly was the highlight of June. We arrived at around 9pm, as the ticket stated that as being start time, and we were looking forward to a fun and ‘early’ night. Alas, the band only came on at 11pm. We weren’t impressed, but forgave them anyway.

The whole band is full of energy, love, spirit, and from the first seconds to the end of encore, their passion is consistent. There were two guitarists, a drummer, violinist, who also sings, flute, keyboard, and trumpet and, as I said, they make beautiful music! Other than Zolani, I have no idea the names or roles of the other band members. I’m proudly ignorant on this one.

Zolani – lead singer -was wearing a very cute bubbly black dress with thin straps (I think), butterfly bedazzled black tights, well worn black all stars and the most interesting cropped jacket made of wire, and there was a string of wire butterflies hanging from her belt. Clearly this girl loves butterflies.

I can’t remember the song they opened with because I was jumping up and down with pleasure that after so many years of support and not having seen them live, I was about to experience an amazing evening with FG.

‘Baba wabatwana bam’ – was the second song, vernac story titled ‘father of my children’. After that, followed ‘Zithande’, which ‘love yourself. I’d heard this song once or twice before, but had no idea of the title. It’s too happy go lucky for me, but I do enjoy the message of self love. Inspired by Mozambique, the next track was ‘ Moto’ which is featured in their fourth album, the recently released ‘Radio Africa’. Before they started, we were taught the chorus so we could sing along, it was fun, and I appreciated how much the band engaged with audience.
An instrumental session, which felt like an intriguing and mysterious journey, was a great sugeu while the vocalists relaxed for a bit after which Zolani’s voice truly blew me away on the popular song ‘Butterfly’.
We were then kept on the story of love for the seventh song ‘Genie of love’ and were quizzed on ‘What kind of thing do you fall in then fall out of’ as an intro  Leading into ‘Potbelly’, Zolani told a stroy of ‘ibompie’ – an ice lolly in bag. I never liked the song, but now understanding the story behind it, I like it.
She says that as a chubby kid, she was nicknamed “ibompie” because she was a cute little round child. She must have been so adorable. I love that she loves her full bodied self and she probably inspires little girls to love themselves the way they are.  Potbelly is really a feel good song, with lyrics like this, you have to agree:
‘Fat thighs, flabby arms, potbellies that give good loving, summer love in the winter time, still gives good loving…’.
The final two songs were ‘fire is slow’ from new album, which sounded very familiar, and then the old favourite, Doobeedoo to leave the crowds on a high. Of course, as with any good show, we screamed for an encore. The lively band ran back on stage and left us with a fun rendition of ‘Waka waka’, one of the official World Cup anthems. Thankfully Shakira didn’t show up.


Finally:
Even though it’s big, Vaudeville has an awesome intimate feel to it and the sound is good, which is not always high on the priority of most venues in Cape Town. One day I would like to attend one of their dinner theatre events – have heard great things about the nights.


Freshlyground have a fan in me forever; their music speaks of the truths of life: fun, happiness, sadness, love, loss, experience, travel, beauty, emotion, and living. Blessings.


Thanks to these seven energetic individuals having fun together on stage for a memorable Sunday night (Monday morning really) At first I was annoyed it took until close to midnight for the show to start, but the wait was well worth it.


Unfortunately they didn’t belt out the tearjerker song ‘Nomvula’, nor did they grace me with the most beautiful love song ever ‘I’d Like’, so when I got home I listened to them over and over and imagined they did it live, just for me.