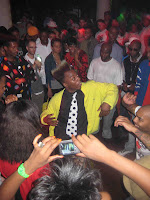 When or where this particular realization happened, I can’t be sure. I can’t even explain why the thought crossed my mind,  but it was clear as day. We don’t dance.  Or do we?

Yes, I’ve seen the kwasa, twasa, twalatsa, and many other Arthur creations in clubs. I’ve seen arms raised in the air as Vinny, Fresh, Kenzhero or Blackcoffee bring it on the one’s and two’s.

I know right after you put on that hot outfit you look at yourself in the mirror and test it out by doing a move or three, but ultimately when you get into the dance halls, be it back in the day and now defunct Electric Workshop and reggae famed Horror Café or nower day somewhat classy Moloko, trendy Capitol,  underground Berlin, Crazy 88 and Taboo etc = the majority of the crowd isn’t actually shakin what their momma gave em.

Once in a while someone will raise their hand to the roof and shout ‘yhooo, that’s my song yall’ and maybe sing a few lines, bounce here and there  – depending on the music ofcourse. But in essence, breaking out a sweat and having sore muscles the next day is not quite the norm in my experience. Why is that?

I know that many a time I have called myself one of those black women born without rhythm  – so by standing at the bar sipping it up, enjoying either a vodka and lime or my newly favoured creation made up of Double creamy Baileys drizzled over crushed ice and topped off with a single shot of Amaretto, my modus operandi would be to sway a little to the music, give the DJ a nod while gliding around the venue, chat to so and so, but most of the time is spent observing the self proclaimed dancing queens and kings, putting a show for their subjects.

I remember the days of vula circle, with fellow observers cheering on the brave ones who have entered the firy circle to have the rest of us in awe. I see some of the said fellow watchers growing with glee as their own confidence is being built up to the climax of entering and showing off their own skills, but I find that out of twenty people gyrating, only a handful will actually jump in there, no holds barred and perform that famous cliché about dancing like no one is watching.  (someone is watching though and it’s hard to forget their critical eyes playing a game on your body) 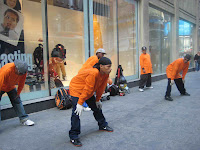 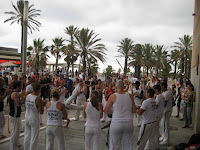 Anytime I see someone sweating it out to the beat I am filled with so much joy (read envy) and I’m rendered speechless (read motionless) by their vigor. I’ve seen the break-dancers on the streets of New York, the half naked Brazilians doing the age-old Angolan muscle-toning passionate conversation of capoiera. I’ve seen the party animals pulling out their best in the dark smoky mall sized clubs of Ibiza, the retro kids bringing it back at Gogo Bar in downtown Jozi, the sweat covered Spaniards in open terrace clubs of Barcelona,  and the youngsters and golden oldies championing the art of the tango in the market places and abandoned warehouses of Argentina. That’s all good and well, but not what I’m getting at.

Or am I missing something?