This past weekend I had a secret and impromptu trip to Johannesburg. Met with some friends, chilled with my dad, and had a bash of a time. All very rushed, surreal and most enjoyable.


Returning to Cape Town on Sunday night was extremely difficult, but I was ready to get back to my life after 24hrs of escape to the big bad city. And this is when the drama started (and ended) 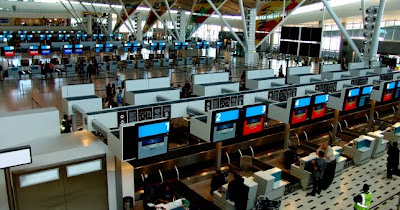 Arriving in the check-in line at O.R. Tambo, I noticed that some 20 odd people had been practicing bad behavior by going beyond the the spot you stand while waiting to be called to the tellers to check in. Winding through the roped area to get to the final ‘next’ spot, I chose not to continue with the disregarding of queue ‘rules’, and so I waited where I was supposed to, and let the ten or so people in front of me get served and clear up the area – even though they weren’t in the right spot. This is when this short, dirty haired, bespectacled and croc ‘shoe’ wearing wretched oldish woman of European descent stood in front of me wanting to carry on with this bad behavior displayed by others before us. I strongly and firmly suggested that she mozy on back to where she came from and stand behind me in line as that was her position. We had a heated, low decibal shouting match after which she succumbed to the logic of my words and huffed her way back to her spot behind me. At that point I was slightly annoyed as she had become a little aggressive and was making less sense with every sentence, finally, to get the last word in,  she threw one hell of stink bomb into the argument:


Verbatim and said loud enough for the other non black people in line to hear her so called bravado in an attempt to stand up for herself : “So this is the new South Africa is it?”


I was stunned. Stuck between throwing my head back and laughing ala ‘Zulu on my stoep’ style or slapping the superiority complex out of her so that her ancestors would understand my annoyance with her stupidity, I was fuming with digust.
Tallying my options and possible repercussions, I gave a small exasperated laugh, accompanied by a ‘you are a crazy bitch’ look, I asked her what race or the new (16 year old) South Africa had to do with the fact that rules are rules? Before she could answer, a white (yes, his race is important for this story) gentleman further back in the queue shouted over to the crazy cow that I was right, and that she was fool to even say what she had said.


What really grated my tits is split over a few points:
a] Did she really think that because she is white and I am black, I would let her walk all over me ?
b] What did race have to do with this entire exchange? Up to that point, she was just a person, regardless of race, gender or creed, who I felt was doing something wrong.
c] She is not old enough to be forgiven for still thinking like a racist supremacist. Now, I’m not saying that any racism is acceptable, but I’m not going to fight the good fight with someone who lived MOST of their life under the blanket of racism and apartheid, and if they are that old, I imagine they’ll be kicking the bucket soon enough.


I do so love this country and how we as a people of many races, cultures and descent are working towards this place of learning about each other, a place of understanding and a place where we more than just tolerate each other; but for heavens sake, some things really have nothing to do with any of the things that ‘define’ who we are. Sometimes it’s just going along with the fact that you are governed by certain rules, which help make life easier for everyone!