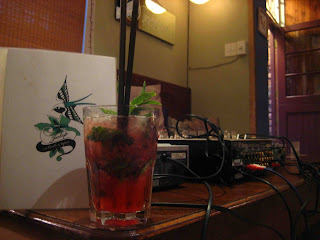 As you follow this blog, and as I scratch up time and inspiration to update as much as I can, you will find I have a fascination with alcohol. Not just drinking the stuff but the places and people that are creative in serving it up and how it is enjoyed.

There is one such place in Cape Town that has my full respect and I will sing their praises til they shut down (Universe forbid). It’s a true gem in the heart of this very european african city on the southern most tip of Africa – Julep. Located just off the infamous party hub Long street, hard to explain the exact location though. (It used to be the Royal Kitchen, if that’s any help)
Quaint little place with enough character to write a storybook, enough class not to check who’s looking before stepping in and of course Conrad (manager / owner) is certainly a treat for sore eyes. And oh is he charming. If that doesn’t tickle you, then staring at the art and photography on the walls should do you just fine. The most important part of this delectable tale though are the drinks.
Julep offers up over thirty different liquid heavens in their delightfully creative cocktail menu including spin off’s of the well known versions. For example, the cuban cocktail; Mojito has a few fruit variations like mango, strawberry  – which in itself isn’t original – and there is a twist to the Moscow Mule and many more…  but if you’re anything like me, you’ll sip on that sexy glass of paradise and you’ll know you’re home.
Making it even better is the happy (3) hour special they have – an opportunity to enjoy Julep’s cocktails making craft at almost half the price.
Julep is still a bit of a secret, and hopefully will stay that way,  so when you’re there you almost feel like the cat the ate the canary. Even without the views of Table Mountain that other’s boast about, Julep is number one.
The music is mix of soulful lounge and upbeat jazz – nothing too uptempo but you’ll be tapping your feet and letting the non invasive groove flow through you.
Even if it is just to see Conrad, Julep must be found!!
Eish, If only I lived in the mother city, or at the very least afford to be there every weekend. 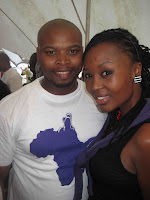 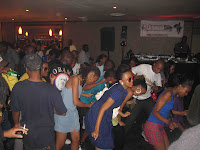 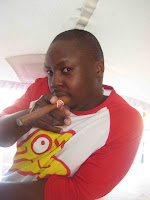 In Jozi, it seems, everyone has their crew and they throw parties. Every this day, every month, whatever and whenever, and rarely do I find a soiree that sounds entertaining even before I haul my ass off my couch, dolly myself up and cruise the streets for this experience. Not that there are that many to arouse my interest in the first place, I do try see what the promoters and creators have in store for me. I can be a little picky considering I am not a tourist and can miss out on a few potentially mediocre gigs.

Now, within the Hip Hop scene, there aren’t that many of these get togethers of music/alcohol/eye candy lovers and so we tend to see the same party goers and more or less the same DJ’s, but can be fun nonetheless. I think we are still living in a phase of ‘who’ll be there?’ rather than what I will leave with – by that I don’t mean another human, or just the possibility of a state of intoxication.
So, on the last sunday of every month there is such a get together at a cool venue in Norwood called The Crazy 88 – (been around for about five years, with the usual name change, although 88 has always been present).
Brought to you well known DJ Dimplez and his Showlove crew. (we’ll get to showlove and their shenanigans in another post) in an aim to be Jozi’s foremost Hip Hop music party hosts.
The PopBottles sunday sessions is by far the best and probably largest ongoing daytime party in the city. Held on the last sunday of each month with a long list of the finest and almost refreshing DJ’s there are.
As of this month, Dimplez decided to add a twist by theming the day with not only the bubbly, but with Cigars and aptly named Pop Bottles cigar session.
I got there around 4pm and it was comfortably crowded but there were still four more hours for the beats to go down, Jozi hip hop heads to swagger in fill up the dance floor and mingle.
True to form, by 6pm it was packed and the party was ablaze. (It really is advisable to head there early)
I had a great time, met up with some people, had drinks, danced a bit, but mostly enjoyed the outside canopy covered lounge type terrace where we have our drinks and watch the colour of the sky change through the slants of the covering over sometimes engaging conversations, taking peaks over at the dance floor. At some point there was a group of people doing the old skool ‘bus stop’ routine to some older skool tracks.
I do keep asking myself though what makes this party so amazing
Is it the month end money in the bank lets be happy vibe?
Is it the genuinely good music from DJ’s that each have a different take on the genre and know how to read the crowd?
Is it how unpretentious the whole thing is?
Is it the fact that 88 is roomy and you can move from hot sweaty bumping and grinding to a chilled leather covered couch?
Is it that the Hip Hop scene is so small that you feel like you’re just going to see friends and share ideas? (fresh meat is spotted the second it walks in the door – errbody knows errbody)
Who knows, just got to go yourself and see what tickles your fancy. 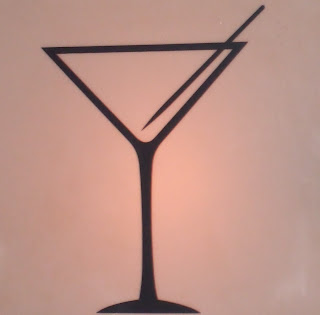 I’ve decided that as part of my own blog, I will give credit where credit is most certainly due.

My first kudos goes to this absolutely mind blowing video blog with very few words, just a visual orgasm like no other. Two parts creativity, one part mastermind, shake well and serve hot, with an Ice Diamond ofcourse – The perfect cocktail.
The site takes a minute to load, but it is well worth the wait because by the time you watch the presentation you’re no longer pissed off that you didn’t know what was going on with your cursor.
I’m tingling with excitement – just want to watch it over and over again, and obviously I will.
Click here and be as amazed as I was. Cocktail making has never looked so inspiring.
Adios

It seems that everyone and their cat has a blog these days, whether or not they are worthy  is for you to decide.

So here is my story, a mosaic of life and all it’s interesting elements
Enjoy.